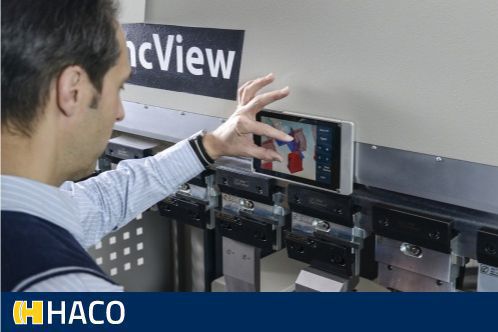 Haco is launching a totally new concept for press brake controllers: SyncView, an innovative dynamic display located on the beam that moves horizontally to the correct bending location. There are multiple advantages compared to a static controller – with time-savings, improved ergonomics and safety as the primary gains. A world first from Haco!

The idea behind SyncView originated by simply observing a press brake’s bending process and evaluating each step objectively. It became quickly apparent that the way in which the operator and the machine interact is often far from logical and efficient.

With the traditional press brake, the operator is actually ‘bound’ to his static read-out screen on the side of the machine. He has to constantly interact with it: for setting up, making adjustments and viewing the correct way to position the piece. This means that he is looking either at the screen or at the work.

Human and machine become one

SyncView was invented from the notion that it would be ideal to be able to watch both screen and the workpiece simultaneously during the bending process. This innovative solution consists of a tablet screen that is automatically positioned at the optimal location: where the piece is actually being worked on by the operator.

The operator no longer has to look at a fixed 3D image on the screen – sometimes meters away from him – this way, time is no longer wasted when bending (complex) parts. With this innovation– in which the 3D image of the bending steps is always right in front of the user – he can understand and carry out the steps quicker during the bending sequence. In addition, the 3D images on the screen can be rotated, without the operator having to leave the work position. This enables an even better and faster evaluation of complex pieces than is possible from a single perspective. User tests indicate time-savings of up to 25% during the actual bending process.

The operator no longer has to constantly keep turning his head between the screen and the place where the workpiece must be positioned. Eliminating repetitive torsional movements of the neck and torso reduces long-term health risks. Now, the operator can look in the same direction at both the screen and the workpiece, which simply requires eye movement – producing a more pleasant, natural and comfortable interaction.

What’s more, should something go wrong, the operator now sees it more quickly. This is a safety benefit particularly when positioning the piece. The operator is no longer occupied either with the screen or with the workpiece. The workflow becomes one, so to speak – enabling the operator to focus 200% on the bending process itself. 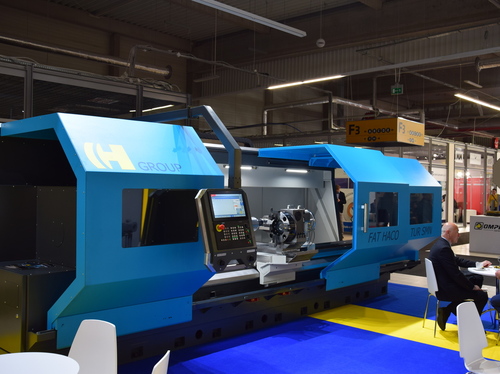 The fastest growing Industrial Fair in Poland. The fourth edition of WIW exhibition is behind us.

Warsaw Industry Week is the International Fair of Innovative Industrial Solutions organized since 2016 at Ptak Warsaw Expo.
A large space and a wide spectrum of themed showrooms allow you to learn about new products and solutions from key industry sectors.